The Best Speakeasies in Orlando

Step back in time to America’s Prohibition era and enjoy a visit to one of the many speakeasies in the city.

Besides being home to the magical Walt Disney World Resort in Florida, Orlando has some fantastic attractions to visit, some of which you have to look closely to find! If you’ve already cashed in your Disney Orlando tickets and fancy exploring a unique side of Orlando, we recommend stepping back in time to America’s Prohibition era and visiting one of the many speakeasies in the city.

What is a speakeasy?

If you’re not familiar with the term, speakeasies were illicit bars and clubs that emerged across America during prohibition (1920 to 1933). Drinking alcohol was not actually illegal, but rather the buying and selling of alcohol, and so secret drinking bars and clubs began cropping up, cunningly disguised and often hidden away underground.

Speakeasies were often passworded, invitation only or even required an identification card. The name ‘speakeasy’ is thought to have derived from patrons having to speak softly and whisper passwords upon entry.

In modern day, many bars and clubs still hold America’s Prohibition heritage close, storying their bars and clubs to resemble speakeasies and this bygone era.

The best speakeasies in Orlando

If you’re planning on visiting Walt Disney World Resort, make sure you also pay a visit to Disney Springs and its rum runner-themed speakeasy, Enzo’s Hideaway.

Decked with vintage 1920s-style furnishings, Enzo’s Hideaway will give you an authentic experience of an old-fashioned speakeasy, with dapper bartenders schmoozing behind the bar and a fabulous variety of rums and scotches to whet your palate.

“The Tunnel Bar is known for its hospitable bartenders, swinging music and humorous graffiti,” says the Enzo’s Hideaway website. “Located in a storied rum-runner tunnel under Maria & Enzo's restaurant, Enzo's Hideaway is a speakeasy that pours Prohibition-era cocktails and serves hearty Roman-style dishes. The entrees include handmade pasta, fresh fish, chicken and steaks. The signature Salumi e Formaggi platter is made to order and features a selection of imported cured meats and aged cheeses.”

A post shared by Pharmacy Restaurant Orlando (@pharmacyrestaurant) on Jun 26, 2018 at 2:43pm PDT

Inconspicuously hidden behind a pair of elevator doors, you’ll find Pharmacy, a vintage bar and restaurant with shelves full of exotic elixirs and cocktail remedies – just what the doctor ordered.

Pharmacy’s Office Assistant, Doris Mitchell, told us about the eclectic concoction of drinks on offer. “Pharmacy has a full bar which specialises in house-made seltzers, tonics, sodas, fresh herbs and crafted tinctures inspired by our leading ‘alchemist’, Dominick Tardugno.”

But of course, these strong potions shouldn’t be taken on an empty stomach, so accompanying this long list of alcoholic prescriptions is a “moderately-priced farm to table cuisine that includes appetizers, entrées and desserts,” says Doris.

Previously, Pharmacy was called ‘The Table’, and offered a luxury fine dining experience. After acquiring the adjoining space, The Table’s owners decided to expand and rebrand as Pharmacy, says Doris. “The name Pharmacy was chosen because during prohibition someone could go to their doctor and get an Rx (a doctor’s prescription) for a ‘little nip’ at the pharmacy. Hence the pharmacy became somewhat of a ‘watering hole’.”

Although not technically a speakeasy, The Courtesy is cosy and dim cocktail bar perfect for having a quiet and discreet catch up with friends over an expertly-crafted cocktail.

Co-owner Diana Zimmerman told us about The Courtesy’s history: “We were the first dedicated cocktail bar to open in Central Florida. We are a husband and wife team working alongside our friend and designer to create The Courtesy’s unique design.”

Inside the bar, you’ll find low hanging lights, vintage décor and old wooden features that give you a real prohibition feel. “We wanted the bar to be completely original and nothing you could find anywhere else or replicate,” says Diana.

“We began with an imaginative team of bartenders who assisted in creating the menu. Seven years later, our menu continues to rotate 3-4 times a year with 12-15 different bartender-curated cocktails. Each cocktail has been tried, discussed, tweaked, and approved by the whole team.”

A post shared by Mathers Social Gathering (@matherssocialgathering) on Apr 21, 2019 at 3:57pm PDT

If you’re looking for a speakeasy that offers a cosy setting and great entertainment, Mathers will certainly fit the bill. Located on the third floor of a 19th century vintage furniture store, Mathers has a reminiscent air of late 1800s Orlando and times past.

Mathers’ website says the bar has been designed with sophisticated social gatherings in mind. In terms of their old-fashioned cocktails, Mathers' "dapper bartenders use boutique spirits and seasonal fruit, with house-made cordials, bitters, and syrups to create classic cocktails and modern libations.”

With exposed beams, rustic décor and a cosy living room vibe, this suave speakeasy is a must for lovers of vintage cocktails and eccentric entertainment. Regular performances include burlesque dancers, live jazz, a portrait artist and even a poetry writer.

In true speakeasy style, at Hanson’s Shoe Repair, entry is only granted to those who have acquired the daily password, which can be found by calling, texting or checking the bar’s Twitter page.

“Step back into the Prohibition era and find out where all the best drinks have been hiding,” says The Hanson Building website. “Enveloped by century-old brick walls and evocative décor, Hanson's Shoe Repair can be found tucked away on the third floor of The Hanson Building. The only chance of catching a glimpse of Orlando's premier speakeasy without the password is from above the unenclosed rooftop deck.”

The Hanson Building is thought to be one of the oldest in downtown Orlando. The original architecture and personality of the building have been preserved, making the quality of Hanson’s Shoe Repair’s craft cocktails synonymous with the building.

Fresh cocktail ingredients and unique combinations mean your taste buds are in for a treat. In keeping with the Prohibition era, you won’t find vodka here, so plan for a night of drinking bourbon, gin and other old-fashioned liquors.

Want to see what other fantastic attractions lie in Orlando? See what great ticket deals we have on offer over on our homepage. 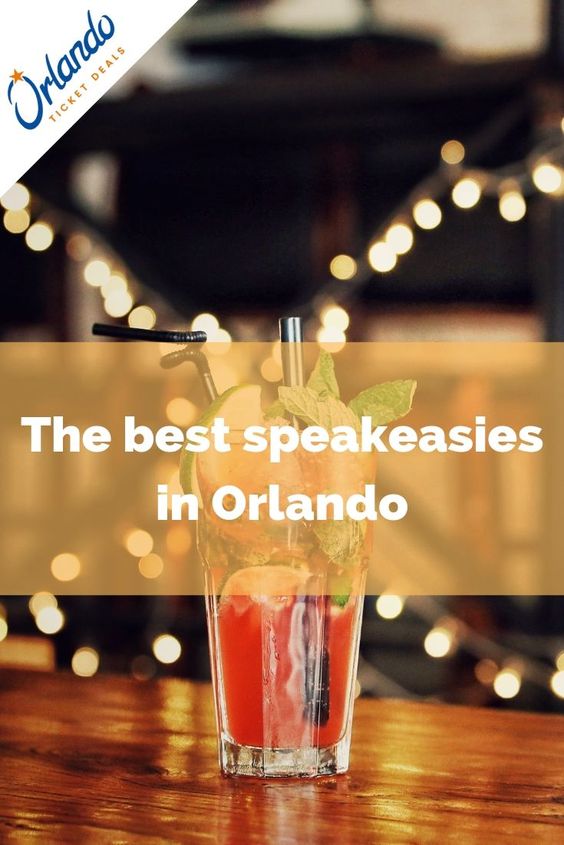